Agriculture and Irrigation of Erode

Erode is well known for its trade and commerce, still Erode district has a distinct place in the agriculture field. Probably, it is one of the most agriculturally developed places in South India. Erode has very close association with Coimbatore district and hence the district gets wholesome help from two of the premier most agricultural institutes of South India, the Agricultural Research Institute and the Agriculture College, both situated in Coimbatore. The developmental efforts of the agriculture department of the Tamil Nadu State Government have penetrated in every place of Erode district where agriculture is the most important form of occupation.

Paddy is the main food crop of the district like most other Indian districts, and it accounts for 86,939 hectares of land. The second most important crop is Cholam which is cultivated in more than 11,240 hectors of land. Erode does not cultivate pulses in a huge scale and only 31,498 hectors of land are used for the occasional pulses cultivation. Spices and chilies are significant among other food crops. Erode is known as the ‘turmeric city’ and cultivation of turmeric exceeds over 14,533 hectors of land. 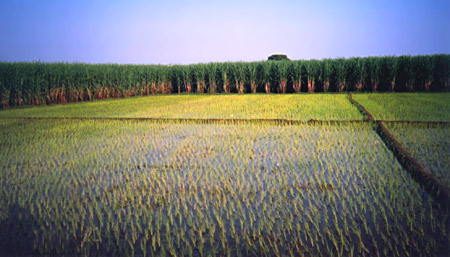 The sub-soil in the most parts of the district is sandy and the surface soil is thin and of poor quality, so the farmers have to depend on irrigation facilities. The uncertain conditions of the North-East monsoon and not favorable South-West monsoon also make the plight of the farmers miserable. The main source of irrigation of Erode is canals and wells. More than 98,805 hectors of land is dependent on canals for irrigation whiles wells are the main source of irrigation of 68,570 hectors. A total of 209,432 hectors are irrigated in Erode.

Rivers coming from the Western Ghats, like Kaveri and Noyyal, are the main source of irrigation in Erode. These rivers are mostly fed by the South-West monsoon. Farmers also depend on the jungle streams for irrigation and drainage, but these streams are uncertain in their water carrying capacity. The Lower Bhavani Project is the most important irrigation project of the district.