Owing to its rich historic background, Erode is an urban center that is dotted with several historic religious sites that receives devotees from all over the world, throughout the year. When talking about the most visited and most popular temples in the region, Arulmigu Arudra Kabaliswarar Temple is a must-see temple that is dedicated to Lord Shiva who offers his blessings in the name of Arudra Kabaliswarar. One of the most important Lord Shiva temples in all of Kongu Nadu, Arulmigu Arudura Kabaliswarar Temple is located in the city center of Erode and just 3 km away from the railway station. 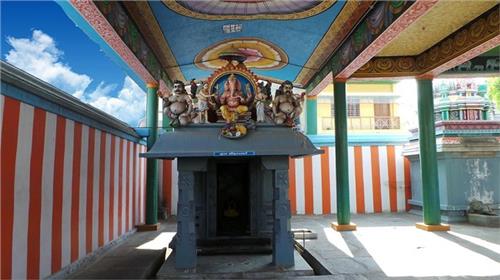 Legend has it that the Erode Arulmigu Arudra Kabaliswarar Temple was constructed by a (Chozha) ruler called Lakshmikanthan. The king performed a yajna for which several pots of milk were brought. Fortunately or unfortunately, the pots of milk for the ceremonial occasion got poured out in a particular spot. The surprised king ordered his men to dig that particular spot. During the process, the king was shocked to see the blood that was oozing out from the spot.

He empathized that there was something underneath and on further digging, everyone got shocked to witness the presence of a lingam. The king finally apprehended that the blood was coming from the lingam and it was due to the hitting of the crowbars used for digging. The top portion of the lingam was disunited into four parts and propelled through the air to fall in four different places. As the head of the lingam (kabalam) was broken into parts, the deity here is known as Sri Kabaleeswarar. 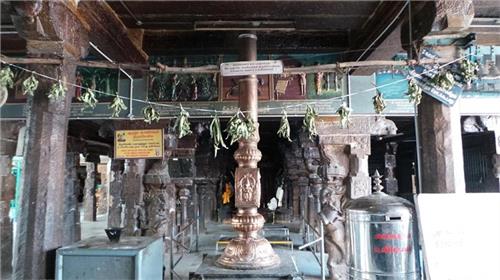 Another story related to this temple says that there was a hapless weaver named Thandavan. He worshipped Arulmigu Arudra Kapaleeswarar every day before going to work. Lord Shiva, on seeing the devotion of the poor weaver, decided to expose it to all and went to his abode when he was not present. Lord Shiva disguised as a graybeard and asked for a small cloth to protect himself from the freezing cold. The weaver's wife replied that she herself have only one cloth. But then, she asked the whereabouts of the old man and she assured that she will help him in some way. The old man told her that he will be staying just outside of the Arulmigu Arudra Kapaleeswarar Temple.

The wife explained everything to the weaver who got back home. On hearing this, the weaver hurried to meet his chief to ask for help. On collecting the new cloth from his boss the weaver guaranteed his boss that he will pay the cost of the cloth little by little. He reached the temple and offered the cloth to the old man. The next morning, when the temple priest opened the holy doors of the gurbhagriha, he was astonished to see a new piece of cloth on the deity and the missing parivattam (sacred headband of the deity). The shocked priest informed the matter to one and all. People gathered there, including the poor weaver and his boss. The boss explained everyone that Thandavan collected that new piece of cloth from him last night. 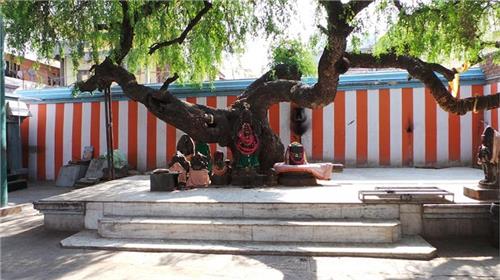 Thandavan recounted and no one was ready to believe his side of the story. People started accusing and went on to punish the weaver. Lord Shiva through the boy of the small town head and sent word that in spite of one’s own troubles, people should be ready to serve those more hapless than them. He further added that to demonstrate this, he acted through the poor Thandavan. 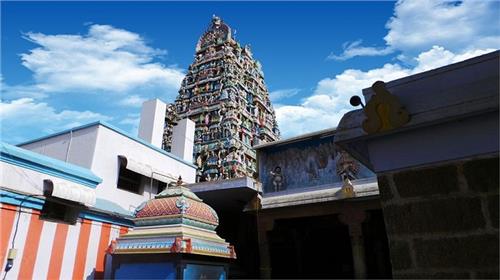 The 5 tier raja gopuram (main temple tower) looks stunning and is nothing short of a spectacular illustration of Dravidian style of architecture. Dwajasthambam (sacred flagpole), Nandhi (vahana of Lord Shiva) and Pali peedam are found at the entrance of the maha mantapam. On the roofline of the mahamandapam, several sudhai sirpams (made of limestone and sand), stahala puranam (history of the temple) can be found. The sculpture of Goddess Kali and Urthuva Thandava Moorthy (a unique form of Lord Shiva with his right leg lifted high in the air) are extremely beautiful. 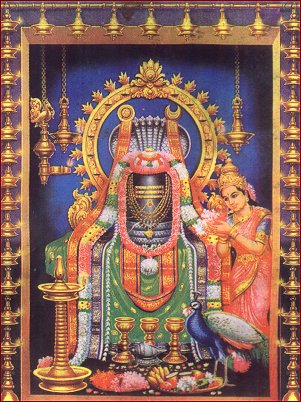 Close the entrance of the gurbhagriha, idols of Dakshinamurthy, Lord Brahma and Goddess Vishnu Durga are seen. The sanctum sanctorum houses a small lingam who offers blessings to devotees in the name of Arulmigu Arudra Kabaliswarar. The specialty of this small lingam is that it has as many as 108 lingams carved on it. It is believed that the presiding deity was consecrated (pratistha) by Durvasa Maharishi from a pallikonda kolam (lying) position. The most important, rather unique significance of the temple is that the phenomena of sun rays falling on the presiding deity exactly on 25th, 26th and 27th during the Tamil month of Maasi (February-March), every year. A separate shrine for the Goddess Varanambikai is also found inside the temple complex.