Erode is one of the most important business centers of South India and that is why, the transportation and communication system is well developed. Erode is well connected with all the important points of the state with all modern means of transport and communication. The nearest airport is in Coimbatore city, which is around 90 km away from Erode city. The city is conveniently connected to Chennai by road and rail.

In the last few years, the road services of Erode have developed. A number of inter-district bus routes which are operated by the Tamil Nadu State Transport Corporation links Erode with other important towns in the Erode district. The bus services in these areas are really commendable. Erode city is also the head-quarters of Tamil Nadu State Transport Corporation. This was originally named as ‘Jeeva Transport Corporation’ or JTC and it began its functions from 1st April, 1983. It later changed its name to Tamil Nadu State Transport Corporation of TNSTC. This transport department operates in some parts of the districts like Tirupurm, Salem, Namakkal and Karur along with Erode. TNSTC is one of the most important government bus services in India and as per the statistics of 31st March, 2005, TNSTC has a total fleet of 1218 buses. The Erode city bus terminal is the main bus station complex in Erode city as well as the Erode district. This bus station is located near the Swastik Circle, which is situated at the junction of the State Highway 15 and Mettur Road. Even TNSTC operates long distance buses that haul to cities like Chennai, Bangalore and sometimes to even Pune. 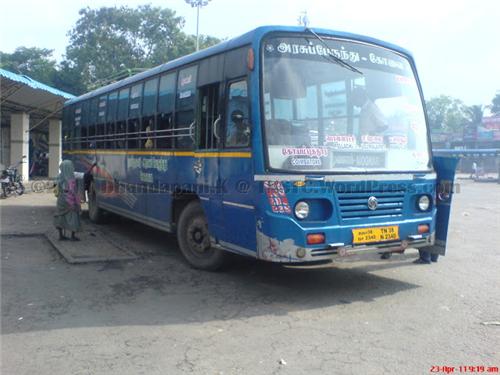 Erode Junction Railway station is situated near the Bull-Fight Circle of the city. In the Erode junction there is a diesel locomotive shed as well as the electric locomotive shed. Erode junction is one of the most important railway junctions operating under the Southern Railways and it has connections all over India. Apart from that, Erode junction functions as a water filling station and toilet cleaning and food provisions are looked after for all the long distance trains passing the junction. There is a broad, single track line in Erode Junction which passes through Karur towards the Trichy Junction and two broad, electrified double track lines passing through Sankari Durg and Tiruppur towards Salem Junction and Coimbatore Junction respectively.

Coimbatore International Airport is the nearest airport from Erode and it is located at a distance of 90 km from the Erode city. This airport is linked with all the important domestic destinations through out India, and two international destinations like Singapore and Sharjah.