Erode is rich in its natrural resources. Be it rich fertile soil or abundace of forests, Erode is one of the cities in Tamil Nadu which has also take care to maintain the its natural resources.

The soils of Erode are mostly of red sand and gravel, which has moderate amounts of red-loam. Occasionally, there are tracts of black loam. In the upland region, vast stretches are mostly gravel-based. Geologically speaking, the red-loam soil occurs mainly under the Kalingarayan channel and also in the beds that are seen in Erode taluk. The red loam tracts are also visible in Bhavani taluk and in Perundurai taluk, but to a lesser degree. Other important parts of the Erode district, like Bhavani, Perundurai and Erode city mostly have stony and sandy soil of the red variety. Gobichettipalayam, an important center of the Erode district has red sandy soil, like Sathyamangalam taluk. In other parts of Gobichettipalayam taluk and Perundurai taluk, red loam soil is seen. 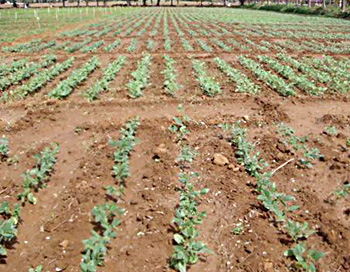 In the Erode taluk, opaque and translucent varieties of fine quality Feldspar are available. Vairamangalam, a place near Bhavani contains Mica and Muscovite. Both Mica and Muscovite are available in Punjai Puliampatti. In some palces of Bhavani and Perundurai, Asbestos can also be found. The Doddan Combai forest of the Gobichettipalayam taluk is full of rich iron ore. This iron ore is one of the finest qualities of iron ore found in India. In recent times, a few traces of gold has been found in in Gobichettipalayam region.

The forests of Erode are rich in different types of commercially significant items, like sandalwood, rosewood, teak, pillaimaruthu etc. In the Moyar Valley, the land strips in Dodda Combai of the Talamalai Ranges sandalwood is abundant. Tamarind trees are abundant in the Bhavani range. The high land is covered with forests and the elevation of the land is from 2,000 feet to 5,000 feet. Trees of evergreen types along with sandal, teak, bamboo and shoal are abundant. Teak trees are mostly seen in the ranges between 3,200 feet to 3,600 feet. On the outer slops of Coimbatore platue, which has an elevation between 1,500 to 3,000 feet, bamboo trees are plenty. Apart from this region, Vadaparai, Hussanur Basin, Dodda Combai of Bhavani Range are significant in the production of bamboo trees. In the forests of Erode, elephants and tigers have a significance presence, apart from spotted deer and barking deer. Panthers are also seen in the scrub regions and rocky hills.