Erode city is built around a demolished fort and there are two temples, one of Lord Shiva and another one for Lord Vishnu (locally known as Kasthuri Ranganatha Perumal). The city is famous for the numerous temples spread all over the city. The Thindal Murugan Temple, Periya Mariamman Temple, Natadreeswarar Temple and Sangameswarar Temple are the four most important temples of the city. Among these, the Thindal Murugan Temple is the most prominent temple and it is situated 6 km away from the city.

The Thindal Murugan Temple is a famous Hindu temple and it is dedicated to Lord Murugan. The temple is located on the Thindalmalai Hill near the city of Erode, just far from the Perundurai Road, a prestigious arterial road off from the city, connecting Erode city and Coimbatore.

Lord Murugan is also called Sri Velayudhaswami. There is a golden chariot in the temple which is a major attraction. The area is surrounded by the Thindal Hills. The Western parts of the temple are known as Nael Thindal or Thindal medu and the eastern part is known as Keel Thindal. The Central Bus Stand at Swastik Circle is just 7 km away while the Erode Junction is 8 km away from the Thindal Murugan Temple. 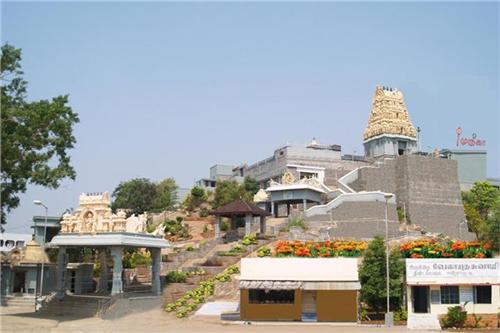 The Natadreeswarar Temple is dedicated to Lord Shiva and it is located on a small hillock island inside the River Kauveri, on the Erode-Karur Highway. The temple has a rich history and it was constructed about 3000 years ago by the Chola Kings and they named the deity as Agasheeswarar. Stories say that the Athee tree inside the temple is more than 3000 years old. On the auspicious day of Tamil New Year, devotees from all around Tamil Nadu gather around the temple to offer prayers to the God. The scenic beauty of the place by the side of the Natadreeswarar Temple is very beautiful and due to its popularity, the temple is well connected with City bus services to erode City. Ferry boat services are available from the banks of river Kavery. 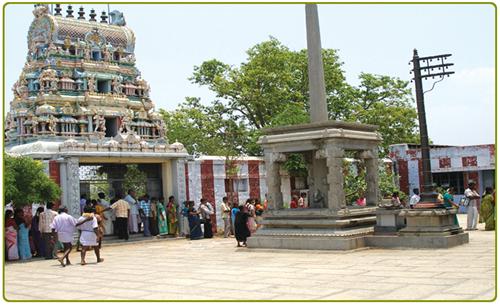 The Sangameswarar Temple is a temple devoted to Lord Shiva in Bhavani, Erode District. The temple is build around the confluences of the Kauveru River and the Bhavani River as well as “Agaya Gangai”, an unknown underground water source flowing in the place. The Sangameswarar Temple draws its parallels with the famous “Tribeni Sangam” of North India. In ancient Tamil literature like Thirupugazh, Pillaithamizh by Thirugnanasambandar and Arunagiriyar, the Sangameswar Temple is praised as Thirunana.

Sangameswarar Alayam is a popular tourist spot. It has a huge hall which is used for different social events, a river side garden, boat rides, a separate swim and bath area. In the place, Kauveri, Bhavani and Amudha Rivers join together and the River Amudha flows as an “Antharvahini” river, just like the River Sarasvathy at the “Triveni Sangam” in Allahabad. Sangameswarar is known as the “Dakshini Triveni Sangamam”. Some small hills like , Padhuma Giri, Naga Giri, Sanga Giri, Veda Giri etc are seen in the place.